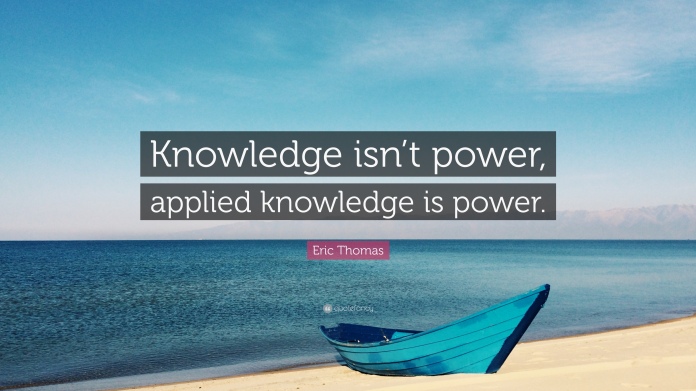 A paper presented at the “Town and Gown” Series at the Department of Political Science and International Relations, Covenant University, Nigeria.

Knowledge is power. So goes the popular maxim, which has been severally explored and tweaked in various ways that sometimes we fail to fully deconstruct its essence and practically explore the functional relationship between knowledge and power. While knowledge, on the one hand, is nearly impossible to quantify, its effect on human life is totally verifiable and measurable.

On the other hand, power is quantifiable but its effect is sometimes very hard to measure. Though power can mean different things, we are limited in this discourse to the framework of power as professional competence and the capacity to effect change in any area of human endeavor. It is the marriage of knowledge and power that forms the theoretical basis of my offerings in these thoughts.

In restating the premise of my thesis that knowledge is power, I consider Steve Fuller’s conceptualization of knowledge as “positional good” to be profound enough to terminate this thought. This is in the sense that knowledge expands or extends “the knowers possibilities for actions by contracting the possible actions of other”. If I know what you know, then you have no advantage over me, except in the case where we also have to measure the application of such knowledge. But if I know what you do not know, then I am elevated in advantage. So, yes. Knowledge does confer on one extended possibility for actions that sets one at advantage over others.[1]

However, there is no effective professional competence or capacity without a sound knowledge base where one draws from. I make bold to say that, to a certain extent, the incompetence we find besieging organizations, both private and public, can be traced to a poor knowledge backing or basis for action. Because knowledge is not stationary but a moving and ever-increasing force, the level of empowerment one derives from it is also subject to motion. You either get empowered by more knowledge, or you get disempowered by less knowledge. This, therefore, speaks to the need for constancy in the interaction between the two concepts for value to be always produced.

There are portals of knowledge everywhere one turns, and the modernity of information access has made pervasive the channels of knowledge globally. However, these have not displaced the critical role the academia plays in knowledge generation and preservation. In knowledge generation, the academia is ever extending the possibilities of what we know today and leading us into unchartered waters of profundity. In knowledge preservation, we are provided with a repository of critical information with clear historical developments to determine the trajectory for new knowledge. It is therefore impossible to overlook or overstate the importance and relevance of the academia in empowering society.

In developed societies, we find the influence of the academic community in almost all aspects of life. Much of the basis for government policy, organizational decision making, investment considerations, research, and development all stem from work done in the universities.

In my study of Public Policy, and because of my interest in administering big cities, I carefully chose to study at the City University of New York — Baruch College, given the close connection and funding it has with the New York City government. That was the first time I saw the deep interaction between the city government and the research done by the university. Several of New York City’s public policy decisions stems from research done by her universities and colleges — SUNYs and CUNYs.

Interestingly, a lot of what we have adopted in our part of the clime, be it technology or policy options, are original thoughts that arose from the laboratories of universities in other countries. The world’s leading producer of chemicals is the company called BASF. It should be noted that the depth of research and training that happens for BASF is in partnership with the Universität Heidelberg, which hosts a joint laboratory, the Catalysis Research Center (CaRLa), and has had a meaningful impact on the business of BASF. We see these kinds of functional partnership dotting all over the West and in some African economies. Such impact on society is at the heart of establishing Universities around the world. [2]

My experience working at the National Assembly of Nigeria made it glaring that there is a major knowledge deficiency at this level of decision making. A case where much of the conversations that happen there have not been subjected to the rigorous inquiry and input of the academic networks available to these members, makes one doubt the quality of the final output of such deliberations. The quality of bills and motions presented suggests the ascendancy of quackery over knowledge. When I opted for engaging proper research to fund the content of a motion sponsored by our office, it was immediately evident that deeper thought had produced the document, and the postulations were scarcely arguable.

While the challenge of engagement lies on both sides, from the academic community, and from the professional cadre, the thrust of this discourse is to encourage the students to consider building a solid career and professional life by taking advantage of the brilliance an academic network such as Covenant University offers. This means you will have to maintain and enhance your connections to your department and the university as a support base for your professional endeavors. It is instructive to see that anytime one returns to the campus and interacts with faculty, something new and exciting is happening. What you knew and were taught while undergoing your study would have undergone a fundamental change in approach as well as in its delivery.

In order to stand out in your career, you need to remain connected to a knowledge source. You may read all the books in the world, but much of it is opinions that have not necessarily been scrutinized by peer evaluation, which is a standard requirement in academic circles. This means that you are most likely to access better quality information to place you at the cutting edge of your profession as opposed to the one who merely depends on peripheral thoughts that dominate our marketplaces.

A lady who lost her consulting job in the heat of the 2008 global financial crisis decided to spend much of her free time in conversations with lecturers and researchers at the University she graduated from. She also took advantage of free departmental classes where existential issues and recent developments in the investment market were discussed. Empowered thereby, she made a series of contributions to online articles by major IMF and World Bank economists, and eventually landed herself in a face-to-face meeting with one of them who offered her a dream job at the IMF.

I have seen several professionals struggle in their fields when they hit a capacity roadblock. Often times it is how to deal with a stalling career progression when beating around the same occupational bush has become mentally exhausting and emotionally draining. The academic networks a person subscribes to can become the platform for gaining fresh insights and inspiration for taking on new challenges in their respective areas of interest. This is one major reason people often quit their jobs and seek to pursue further qualifications in a particular field; just to give them an edge over the competition. So a healthy relationship with your lecturers and professors is a vital life-giving factor in ensuring that you consistently stay relevant and receive fresh perspectives on the path you have chosen.

Permit a slight deviation here but related to the subject matter. The academia must find ways to keep their doors open to vital interaction with their products and society. There are so many unexplored possibilities in this regard. Free online audit of classes, short courses aimed at continuing education or periodic online consultation are ways to keep engaging graduates and getting marketplace updates.

Also targeted workshops, seminars, conferences, can help attract major participation from graduates and their employers. For instance, a seminar on Budgeting for Public Policy can be carried out by both the Accounting and Public Administration Departments of the University and the target audience be graduates who are in Public Sector Accounting and Public Administrators/Civil Servants.

Another suggestion would be for academics to find ways of communicating their research finding to the public in non-technical language. This is one reason why policymakers, for instance, will scarcely read research documents from universities due to complex verbiage. Where there is profound knowledge to be shared with the public, academics must develop the skill of creating concise documents with engaging language, and learn to distribute these through available social platforms with their intended audience. This is a key step in attracting attention to deeper functional partnerships between professionals in the marketplace and the academic community.

In our country today, we must begin to give our academic communities and networks their rightful place as the brain banks of the nation. We are not lacking in brainpower by any measure, we are merely not engaging them for the value they hold. I make bold to say that the fledgling systems we have built over the years is due to a lack of thorough engagement of our knowledge houses to produce what best fits our peculiar needs. While that might be a matter too weighty for a mere paper like this to address, I will encourage the individual reading to find ways of mining the massive reservoir of information that lie within the circles of knowledge an institution like ours brandishes. I will be remiss to not reemphasize here that knowledge only becomes power when it is deliberately engaged.

[1] (Fuller, Can Universities Solve the Problem of Knowledge in Society without Succumbing to the Knowledge Society?, 2003)